**Good news! I’ve single-handedly discovered the one sure-fire way to ensure you stop blogging completely. Just write a post about how you intend to write more.

Even better news!  Here’s a post I told my new friends over at Lux Delux I would write for them…a month ago. Enjoy.**

First, some background: You know me. You know I spent years wandering around North America living out of a backpack and sleeping on stranger’s couches. If you know me really well, then you know that for the last year I’ve been doing basically the same thing (…except now I get to create big urban adventure games at each destination and more often than not I get to shower).

Bottom line, you can’t travel that way, that often, without having a couple of close calls. Two in particular always come to mind, and both took place in everyone’s favorite city of sin. I won’t go into detail again but one of them involves an old man who walked into a seedy downtown bar with a few too many dollar bills in his hand on dollar shot night (and it almost turned into free black eye night for yours truly) and the second involves a con man, a cab to the airport, David Copperfield tickets and a goat (Okay, there was no goat, but doesn’t everything sound more exciting when there’s a goat mysteriously involved).

Take-aways? I travel like a bum and I don’t have the highest view of Las Vegas. 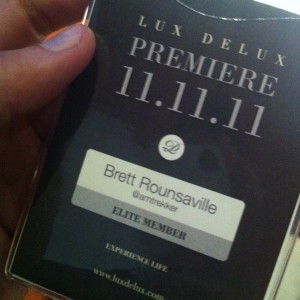 So you’ll understand that it came as a little bit of a surprise when I was asked to join Lux Delux for a weekend in Las Vegas last month. And an even bigger surprise when I realized they may have altered my views on not just Vegas but travel in general.

Turns out there’s something to be said for ridiculously comfortable pillows and the occasionally VIP treatment.

Here’s the shtick, Lux Delux is shooting to be that company that everyone thinks of when they hear the words, “unique experience.” For now they’re only providing service in Las Vegas, so they flew out a handful of social media experts and one vagrant (that’s me) to soak in all they had to offer. This meant steak, lobster and drinks came at us from all directions our very first night there, followed by a backstage tour with the Jabbawockeez dance crew.

Basically, we all got a feel for what it must be like to be an over the hill TV star from the 80s. We were important enough to get the best treatment in every restaurant, bar or club we set foot in, but didn’t have to be bothered with all that “being recognized” stuff.

Other attendees have already done a better job of giving the rundown on the weekend’s activities, here’s a post from Christine Martinez and another from Jim Hopkinson, instead I’ll just hit you with the highlights…er, actually, there were quite a few highlights. Let’s take this in another direction: 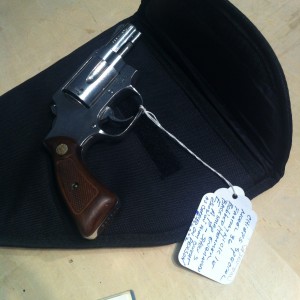 There we go. A completely random tangent. Home sweet home.

Seriously though, by far one of the coolest bits of the trip was meeting Warwick Stone, the curator of all of the Hard Rock Hotel and Casino’s MASSIVE collections. Show me another guy with one of James Brown’s crowns, a letter from Kurt Cobain and a plaster cast of Jimi Hendrix’s man-bits in his office! I dare you.

So yes, I had a great time and made lots of new friends! Do I think that the VIP life and bottle service at the most happening club in Vegas is for me? Not by a long shot. But, here’s what is going to make Lux Delux killer. How freaking awesome would it be to hit them up for THIS adventure.

It’s not all Grey Goose and Champagne. Sometimes it’s just about having a badass unique experience.

Here’s a link if it turns out you needed an invite to look at that last one.

Don’t say I never gave you anything. 😉